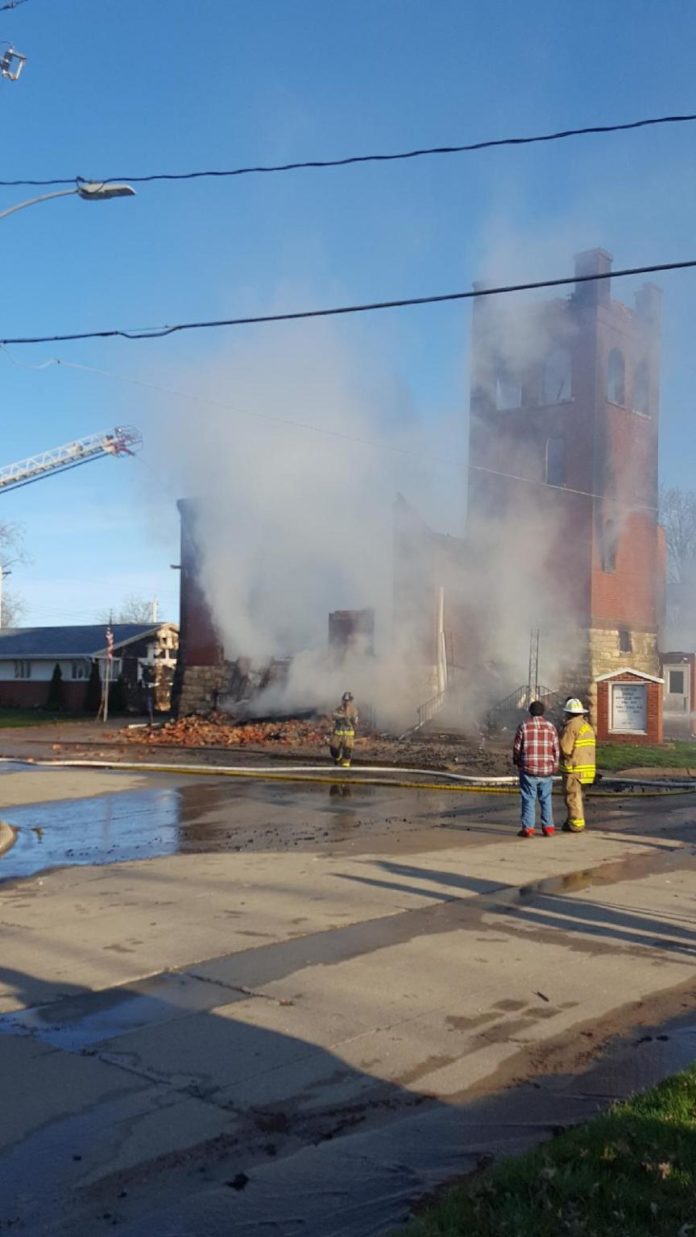 The congregation of the Pleasantville Christian Church (Disciples of Christ) intends to rebuild the house of worship on the same site following the March 30 fire.

Pastor Don Naftz says the elders and trustees have hired an architect who is actively designing the new building. Despite the fire, the church was able to save the original building’s cornerstone, an angel memorial, one stained glass window and the cross that hung over the altar. All these pieces are expected to be worked into the new building’s design in some way.

No one knows what the new building will look like, as it will be brand new. The saddest thing is that there are families who attended who occupied the same spot in the sanctuary for decades. Things like that you cannot replace, Naftz says.

When the new church is built, there is a possibility it will utilize chairs instead of pews. This will help with sanitation and social distancing moving forward. Acoustics and other aspects that define a strong, modern church building are being considered within the design.

Congregates have been unable to worship as a group for months, dating back to before the fire. Naftz is eager to preach in front of a group again after spending all this time delivering sermons to his phone and not to the faces of fellow believers. When he can look into the eyes of his congregation, it affects the message.

“At least for me it does,” Naftz said. For now, his messages can be heard on KNIA at 9 a.m. Sunday mornings and on Facebook Live at 10 a.m. He is very thankful for the musical contributions to his virtual service by John and Lois Turnage, and Miika Busick.

Naftz lives in the parsonage next to the church, which sustained only minimal damage. He’s often greeted as he works in the garage by members, as well as the community. Phone calls, cookies and other greetings have been exchanged over the past few months as he has tried to help shut-ins avoid loneliness. He has been grateful for all of these interactions.

Before the new church goes up, Mason Funeral Home has graciously agreed to let the congregation worship together inside its chapel when everyone feels comfortable with live services.

A church is not just a building, if you ask any pastor, it is the people. A group of young Christians were set to be baptized before COVID-19 and the fire. They joined Naftz in agreeing that they would postpone their baptisms until the first service back in the new building.

To erect the new church, more money is needed. Donations are accepted through a fund established at Peoples Bank. Naftz and the elders prefer getting mailed donations to allow them to more easily send thank-you cards or otherwise show their appreciation for everyone’s support. Gifts can be mailed to Pleasantville Christian Church Resurrection Fund, P.O. Box 188, Pleasantville, IA, 50225.

Naftz has been with the church since January 2019. As he says, “a lot has transpired in the life of the church” in that time. The irony of the Christian Church resurrecting itself after a disaster is not lost on him, and he fully intends to work that into his messages.

For more on the church, as well as its fundraising efforts, check the Facebook page Friends of Pleasantville Christian Church.