Though not formally declared by fire officials as of this original story, the Pleasantville Christian Church building appears to be a total loss. However, not everything was destroyed in the early Monday morning fire.

Pastor Don Naftz, who resides in the church’s parsonage next door to the building, said he heard glass breaking at around 5:15 a.m. Monday, March 30. He looked out his window and saw flashing lights, which he first thought were from the trash collecting truck until he saw a small flame coming out of the church corridor.

Naftz called the fire department, grabbed the essentials from his home and got out. The building at one point became completely engulfed in flames. The Knoxville Fire Department was dispatched to the scene at 5:40 a.m.

Knoxville Fire Chief Cal Wyman said he has no idea what caused the fire or where it started at this time. By the time the department arrived, the flames had consumed much of the church. They were coming out of the roof and every window.

Miles Anthony, one of the church’s trustees, said he could see the flames from his home – three miles away. The church building was the tallest structure in downtown Pleasantville. He drove to the church and what he saw could only be described as “heartbreaking”.

“There’s no words for it,” Anthony said.

In addition to Knoxville Fire, other responding agencies included the Milo, Hartford, Pleasantville, Knoxville Township, Pella and Melcher-Dallas fire departments. Many were still on scene watering “hot spots” to ensure the embers did not reignite. Fire investigators from the Marion County Sheriff’s Office were also on scene.

The fire hit the church at a time volunteers were remodeling on the inside. Attendance and membership has been steadily increasing. This is not the first time the church building has suffered a setback.

A bolt of lightning damaged its bell tower, which made the structure unsound, years ago. Worship services were held at the Webb Shadle Memorial Library for several months. During that time, the church members debated whether to repair the existing building that is over 100 years old, or build new. They opted to repair the building, and an anonymous benefactor paid for much of the work.

The building has largely been reduced to rubble with a few walls still standing. However, a concrete angel donated by William Woodside and family, was not budged. Closer inspection showed little signs of damage.

“I think it means ‘just have faith,'” Woodside said of the significance of the angel still standing. “We will continue. There is hope.”

The angel was donated to the church by the Woodside family in memory of daughter Miranda “Randi” Woodside. Randi died July 16, 2012, at the age of 19.

William Woodside has been a member of the Pleasantville Christian Church since he was one week old in 1958. He was carried into the church in a basket by his mother on Easter morning.

Though the heat damaged the siding of the parsonage, there was no damage to the flagpole or American flag that stood between the two buildings. Onlookers believe that, too, is a sign. A cross that hung in the church is also still in one piece. 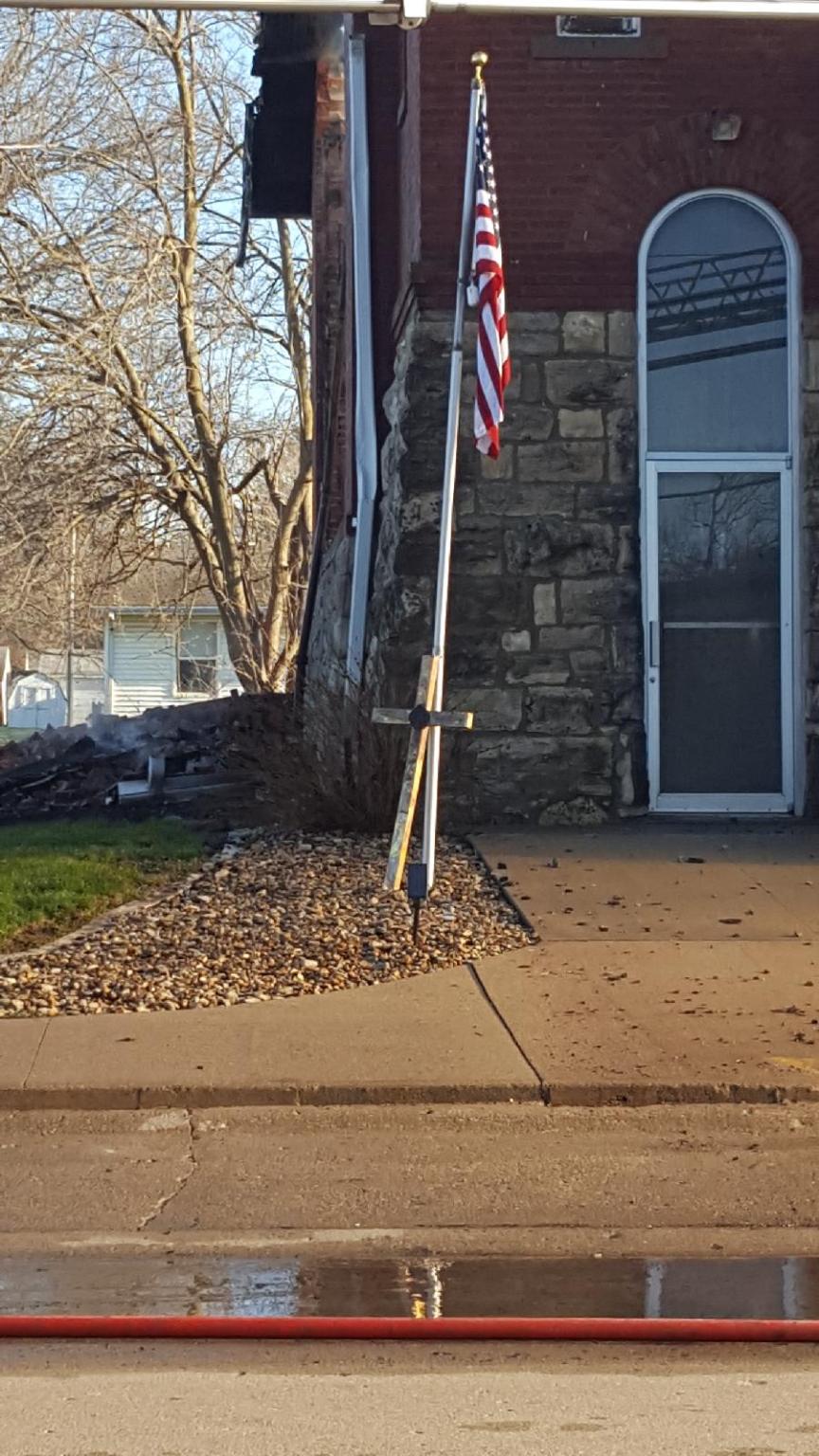 There is doubt that the church building will be rebuilt. There is also faith from church members that the group will prevail and stay together.

“When a forest burns down, new life grows,” Naftz said. “Life comes from the ashes.”

The minister is eager to get back to leading his flock, regardless of where that may take place. Naftz views the building as just a structure – the people are what makes a church.

He’s waiting to see what God calls him, as well as the church members, to do. Due to the COVID-19 pandemic, the church had not gathered inside the building together for services for two weeks. Virutal services will continue as they have in that time.

“In time, God will reveal what He wants us to do,” Naftz said.