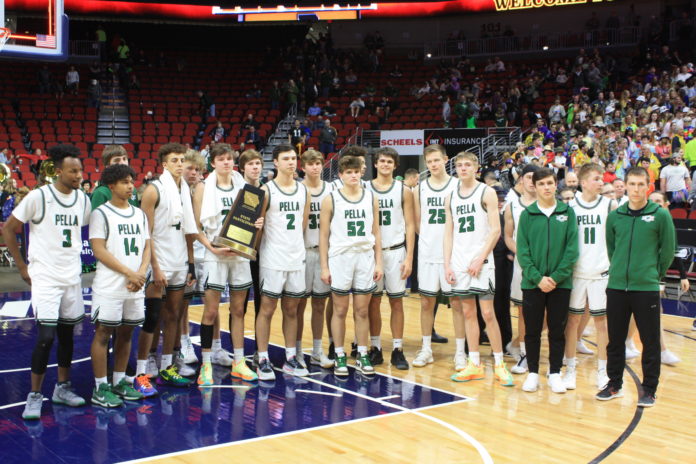 The Pella High varsity boys’ basketball team was unable to go beyond the first round of the 2020 State Tournament. A taller, extremely efficient Sergeant Bluff-Luton team bested the Dutch 58-43.

“We just couldn’t finish down the stretch,” Grant Nelson said. “They out-rebounded us. We had the effort, but it just wasn’t falling.”

Pella was only able to score five points in the first quarter, as SBL controlled the paint. Scoring so few early on allowed SBL to get a lead that the Dutch struggled to overcome.

Part of the reason the Warriors were able to gain the upper hand is with three, talented players who each stand over six feet, seven inches. Nelson added that the team tried to use their athleticism to overcome the size advantage, but it did not pan out.

“It was certainly tough,” Logan Shetterly said. “We couldn’t get shots to fall.” He knew SBL would have the advantage on the inside.

The Warriors’ lead was 16-5 at the end of the first quarter. For much of the quarter, the Dutch offense had been able to hold SBL to just 10.

In the second, Pella’s Karl Miller did a great job of controlling the ball, but there were still not many opportunities for the Dutch to take shots. Two of the Dutch’s best scorers, Treyton Sturgeon and John Oltman were unable to sink anything in the game. Nelson was the only Dutch player with a three-pointer in the first half.

With a 32-18 lead, SBL was happy to run the clock out and leave the Dutch’s work cut out for them in the second. Pella struggled to get anything going early in the third. For the entire game, SBL had the perfect defense for the Dutch’s fast-paced offense. When SBL had control of the ball, they committed few turnovers and passed efficiently.

“Give them credit,” Shetterly said of SBL. “They’re a great basketball team.”

Going into the fourth, SBL’s lead was 43-30. The Dutch had been down by double-digits most of the game and could not overcome the hump. Head Coach Derek Schulte credits SBL’s defense and the deficit it was able to maintain for the Warriors’ win.

“It was a fun season,” Shetterly said. “Sucks that it ended early, but that’s alright.”

Shetterly finished the game with 14 points. Nelson led with 14, with Miller and Parker Elder each with five. As a team, the Dutch had three steals, three blocks and six assists.

“Give SBL credit, I thought they were terrific,” Schulte added. Despite the early exit from the tournament, he is proud of the team and its season. “This team, this group of seniors has been an absolute pleasure to coach.” He added that they have worked hard and represented the community well. “We’re disappointed that we don’t get one more opportunity to play together as a team.”

The Dutch finish the season at 19-6. This was their 17th State Tournament appearance.

Congratulations on a great season!