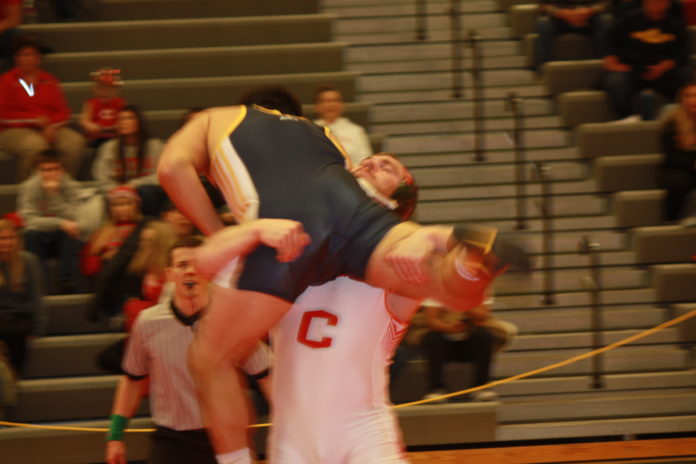 Senior Nathan Fritz (Sigourney) was second at 184 pounds and sophomore Rob Areyano (Selma, Calif.) was third at 149 pounds and are qualified for the national meet.

“Our team showed such a tremendous overall effort, top to bottom,” coach Eric Van Kley said. “I couldn’t be any prouder of the toughness we showed. Our teamwork and camaraderie contributed to such a special weekend.”

Lee was unranked entering the weekend but rattled off four wins to win his first regional championship and punch his ticket to the national meet for the first time. He had a 3-2 overtime win against the No. 8 ranked wrestler in the country, Wartburg College’s Jordan Brandon, in the semifinals. He punctuated the weekend with a 6-5 victory over Loras College’s Wyatt Wriedt in the title bout.

“The majority of the coaches thought (285 pounds) was the deepest weight class,” Van Kley said. “To win that class was nothing short of remarkable. He deserves so much credit for his work ethic and commitment. Our new assistant coach Brad Steele has been a tremendous part of his improvement.”

Fritz defeated Cornell College’s Bryce Oveson 9-6 in the semifinals to secure his second trip to the national meet before dropping an 8-4 decision against North Central College’s Cody Balridge in the final.

“It’s so special that he can get another shot at nationals,” Van Kley said. “He’s such a tremendous example for our team on and off the mat.”

“He really let it fly in that last match,” Van Kley said. “It was probably his best match of the tournament.”

The NCAA Division III Championships are scheduled for March 13-14 in Cedar Rapids.