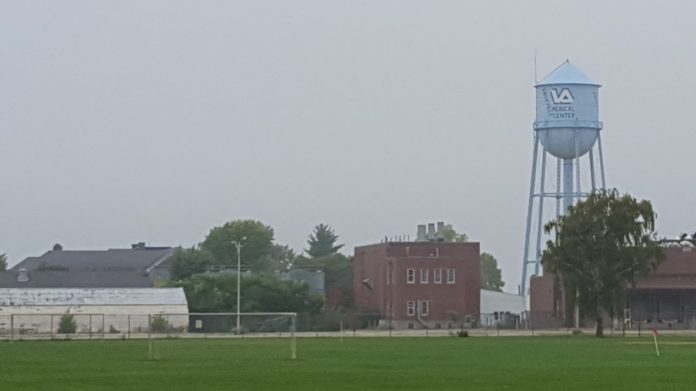 The gates are still up that indicate anyone who steps on to the former Knoxville VA campus will be considered a trespasser. However, Marion County now owns the land, and those who want to walk through are able without fear of prosecution. Knoxville City Manager Aaron Adams and Marion County Board of Supervisors’ Chair Mark Raymie both stress to not approach the buildings for one’s own safety, and do not attempt to go inside any of them. This is, again, due to the deteriorating condition of the buildings and for public safety.

It is okay to walk along the roads on the campus, but vehicle traffic is discouraged, given the condition of the roads after years of neglect. The City and the County both stress safety when going through the campus as a pedestrian.

The latest on the campus, now known as the Knoxville VA District, is that a request for proposal has been submitted to the State Historic Preservation Office regarding how to market the two oldest buildings on site. As reported, an agreement had to be reached with the state office before the County could take possession, as the campus is on the National Register of Historic Places.

The agreement called for the County to market the two oldest buildings for 60 days. If no one is interested in purchasing them by that deadline, the County may demolish all structures on campus.

Mayor Brian Hatch has said that the demolition process, when it begins, is expected to take at least one year. The Knoxville VA District is set as a discussion item on the supervisors’ Feb. 25, 2020, agenda. The meeting is set to begin at 9 a.m. in the board room at the courthouse.