This was the kind of game for which college football fans clamor. Two teams at the top of the heap, battling for American Rivers Conference superiority met at Ron and Joyce Schipper Stadium Saturday afternoon and it all came down to a gutsy call by Central Head Coach Jeff McMartin in overtime. The gamble payed off, as the Dutch defeated the Wartburg Knights, 57-56.

McMartin told the Tribune following the game that the two-point conversion was something the team had worked on all week. They could tell by the flow of the game that, despite having the prolific Jon Alberts at kicker, this game was not going to come down between the uprights.

The conversion attempt was a “last gasp” effort against a Knight offense that had just scored on two plays to open overtime. McMartin said going for two “just felt right.”

“It was just the right thing to do,” McMartin said.

As the Dutch lined up for the conversion attempt, everyone – including the packed visitors’ stands filled with black and orange – was on their feet, screaming at the top of their lungs. Quarterback Blaine Hawkins received outstanding protection as he quickly dropped back and fired the ball to Hunter Robinson, among a few Knight defenders. Robinson caught the pass and was immediately hit before falling just across the goal line to lift the official’s arms up to signify success for the Dutch.

“We drew that play up this weekend,” Robinson told the Tribune. “It was supposed to come out a little differently.”

Hawkins and Robinson both tipped their caps to Wartburg, as well as McMartin. Both teams truly faced loss throughout the game. 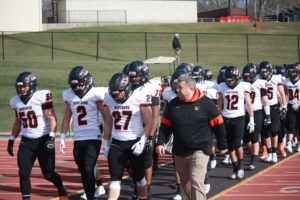 Early on, the contest seemed as if it was not going to live up to its billing. With a slight wind on the field, Wartburg won the toss and deferred to the second half. Central immediately took advantage when Hawkins connected with Erik Knaack for a huge gain. A few plays later, Hawkins found Ross Norem in the corner of the end zone for a quick touchdown.

Wartburg was quick to respond, as quarterback Noah Dodd scampered for a big gain before connecting with Jojo McNair for a 17-yard strike.

Tanner Schminke returned the ensuing kickoff to the 28 for Central. This set up a long run by Hawkins to the Wartburg 49. Momentum quickly shifted as he threw an interception to Antonio Santillan on the next play. Defense had Hawkins’ back and shut the Knight offense down to get the ball back into his hands.

Hawkins opened the drive with another long strike to Knaack before he put the offense on his own legs. He made it to the one, then stretched across on the next play to put the Dutch up 14-7.

On the next Central offensive drive, Hawkins connected with Knaack for a 31-yard touchdown strike to put the Dutch up 21-7.

Early on in the second quarter, Hawkins and Knaack connected again to embarrass the Knight defense with a 60-yard touchdown.

With a 28-7 lead, the Dutch still kept up the pressure on Wartburg. The Knights were making good yardage on the ensuing possession, until Dodd was picked off in the end zone by Brayden Egli. Two plays later, the Dutch offense struck again, when Hawkins threw a 49-yard touchdown pass to Cameron Bannister to go up 35-7.

Wartburg put together a strong drive in response. It was capped off with a touchdown pass from Dodd to Kolin Schulte, good for 13 yards and to drop Central’s lead to 35-14.

The Knights struggled with penalties for the remainder of the half. This helped the Dutch strike one more time, when Hawkins connected with Robinson for a nine-yard score and a 42-14 halftime lead.

The tide would turn in the third quarter in favor of the Knights, but not until after Hawkins and Jason Hopp added another touchdown for Central to go up 49-14. With the drubbing firmly on, the Knights responded with three scores in the third, as Dodd connected with Schulte for a five-yard score, followed by a 13-yard touchdown pass to McNair.

With their lead decreased and the momentum thoroughly on the visitors’ side, the Dutch were forced to punt. Kain Eagle’s punt was blocked and picked up by Will Hasken and returned for the touchdown.

With the score now 49-35, but still in the Dutch’s favor, Wartburg intercepted Hawkins again on the next offensive play to set the Knights up first and 10 on the Central 39 to begin the fourth quarter. On a fourth and three, Dodd connected with Mason Carter for a 19-yard score. Central struggled on the ensuing possession and left the score at 49-42. 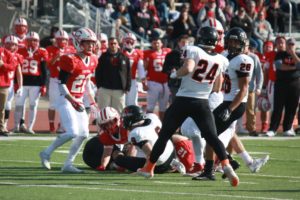 Wartburg threatened once again by marching all the way down to the one-yard line. The Central defense held strong and kept the Knights out of the end zone to avoid the tie at that time.

“Every stop was going to be big today,” McMartin said. “That was huge.”

The Central offense managed to get away from the danger zone, but could not convert. After being forced to punt again, Wartburg was set up on the Central 40. Dodd and McNair connected to get down the six. Though it took them three tries, the two eventually made it across the goal line to tie the game at 49.

The game was forced into overtime. Central again won the toss and decided to put the ball into Wartburg’s hands to begin the period. Two plays later, Bennett Goettsch crossed the goal line to put the Knights up 56-49. Central’s overtime drive took a little longer, but as stated, it paid off and gave them a 57-56 win.

“One thing we keep saying in the huddle is keep believing in each other,” Hawkins said after the game. He added that they just “flushed away” all the trouble they had with the Knights in the second half.

“Feels pretty good right now to get a win over Wartburg,” Robinson added. “We’re going to celebrate this tonight.” As of this post, the team has already likely shifted its focus to the Nov. 16 opponent, Coe College.

“I’m proud of these kids,” McMartin said. “They really battled and overcame a lot. Wartburg’s a great team.”

The game produced 1,224 yards of total offense. The Knights had 356 passing yards and 238 on the ground, while Central had 381 pass yards and 249 on the ground. Dodd threw for five Wartburg touchdowns and Hawkins six. Knaack finished with 222 receiving yards to lead all.

Wartburg and Central are tied atop the American Rivers Conference, with identical 6-1 conference and 8-1 overall records. The Dutch travel Saturday, Nov. 16, to Cedar Rapids to take on Coe (5-2 in conference) while the Knights host Loras (4-3 in conference).