Chris Hudson has been named Iowa’s Class 3A Assistant Football Coach of the Year. He is set to receive his award at the UNI-Dome on Nov. 21, during the Class’s championship game.

This is the first time Hudson has received this award in his 23 years of coaching varsity football in Knoxville. He was nominated by Head Coach Eric Kellar for the job he does with the team.

“No coach gets into the profession to win awards, but it is very nice to be recognized for the work you put in,” Hudson told the Tribune. “We have a great staff here at Knoxville and this award really does reflect the hard work of everyone.” 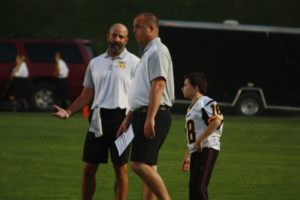 Hudson has been teaching in Knoxville for 24 years. He started his coaching career with eighth grade and volunteering with the varsity staff. For three years, he was the varsity head coach.

He was inspired to get into coaching by those he had growing up. Once one begins coaching, it can be hard to leave.

“They had a tremendous impact on my life,” Hudson said. “I wanted to be able to give kids what I was given by coaches like Bob Christy, Brad McWilliams, and Joel Johnson. Coaching gets in your blood. It’s hard to walk away from the emotional rollercoaster of coaching.”

Hudson and Kellar have a good working relationship. Kellar allows his assistants to do their jobs and trusts them to help the team be the best they can be. Both also have experience coaching track. 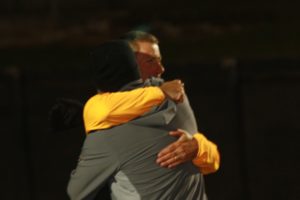 “Eric and I can relate to the ebbs and flows of a varsity season,” Hudson said. “I’m very appreciative of his friendship all that he has done for KHS.”

The respect is mutual.

“‘Hud’ has passion and energy that won’t quit, and he loves kids,” Kellar said. “He is always more than prepared and willing to do anything I ask of him. We are lucky to have him coaching our kids in Knoxville!”

Like all educators and volunteers who serve the community, Hudson said it would not be possible without the support of his family.

“Thank goodness for my wife Mandy and my kids Mike and Hayden,” Hudson said. “All coaches say this, but none of us could do our jobs without a supportive family. I’ve had the privilege of coaching my son Mike over the past three seasons. It’s not always the easiest of tasks but I sure do appreciate having the opportunity.”

Congratulations, Hud, from all of us here at the Marion County Tribune!