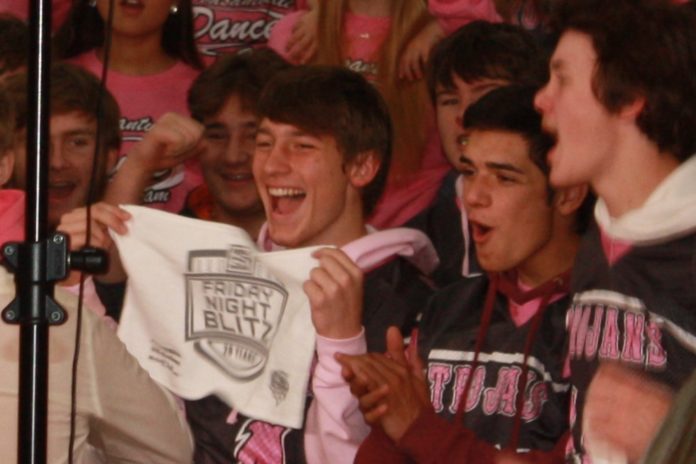 A good turnout of Pleasantville residents got out of bed before the sun to celebrate their community’s exposure on Des Moines television and to get ready for the annual Pink Out football game tonight, vs. Interstate 35.

The day began with Shelly Cook, Dana Hintz and crew arriving at the PHS kitchen to begin cooking doughnuts at 4 a.m. Doughnuts and coffee were enjoyed in the PHS cafeteria by several pink-clad students and adults.

From there, the crowd poured into the gymnasium to be featured on ABC 5’s Blitz Gameday. Several segments were recorded for the morning news program that featured the pep band, dance team, football team and others. Among those interviewed by the morning show’s hosts, Matt McCullock and Elias Johnson, were Superintendent Tony Aylsworth, Band Director Lucas Trainor, PHS Principal Gary Friday, Activities Director Jeff Cook and Head Football Coach Mack Jorth.

Between different segments taped at PHS, the band played music that will be featured in tonight’s marching band show, including “Jenny/867-5309” and “Paint it Black”. Those in the crowd were given towels with the segment’s logo on it to wave as things got hyped up. 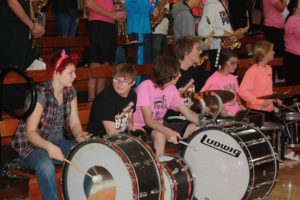 Amber Sexton with ABC-5 said the crowd was great and very lively – even though taping began at 5:30 a.m. She was impressed by the turnout and the fact that fans of all ages were there.

McCullock said the segment has had a good run. To keep the crowd happy, he chose the Trojans to defeat the Roadrunners Friday night and he put on one of the pink t-shirts sold for tonight’s game.

“I’ve been doing this for for years,” Johnson said. “This is among the top three crowds we’ve had. I’ve never seen a school rally around a cause. You only see this in a small town.” 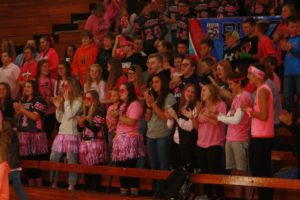 Tonight’s game will also be a fundraiser for the family of Jasmine Fowler, who is battling cancer. She is the granddaughter of longtime Marion County sports reporter Perry Bell and wife, Lisa.

“Everyone did a great job,” Friday added. “It was nice to have the crowd and for the Blitz to come to the Pink Out game.” 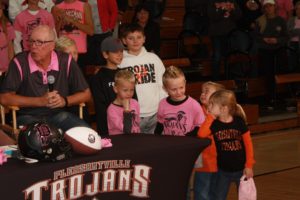 As for the game itself, Jorth said the I-35 Roadrunners will be another tough opponent for the Trojans.

“They have a very athletic QB and some weapons at RB/WR so we need to be ready to defend a lot of space and tackle well Friday,” he said. “Defensively, they are physical and athletic.  It will be a challenge for us and we better be ready to play very physical and execute at a high level!”
Kickoff for tonight’s game is set for 7 p.m. at PHS. 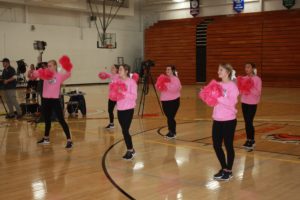 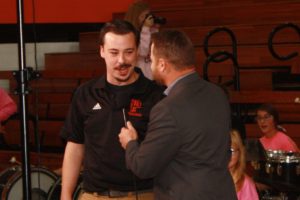 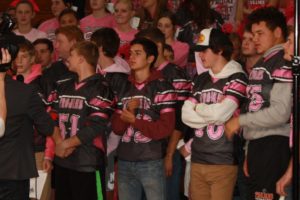