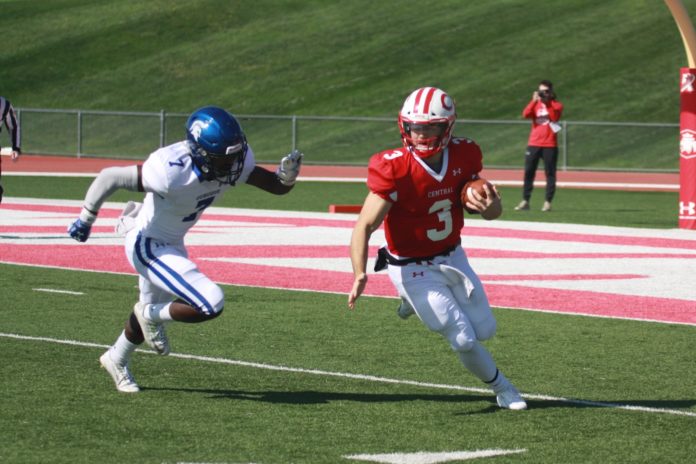 PELLA—Seeing its undefeated record whisked away in in a flurry of mistakes on a wind-swept afternoon, the Central College football team stumbled through a 28-7 setback to the University of Dubuque Saturday.

Five interceptions, seven penalties and a miniscule 20:27 of possession time in the 60-minute contest resulted in the first loss in five outings for the No. 23-ranked Dutch (4-1 overall, 2-1 American Rivers). Dubuque (3-3 overall, 2-1 conference)

“It was unreal,” coach Jeff McMartin said. “The turnovers played a really big part in that football game.”

Interceptions on their first two possessions put the Dutch on their heels, but the defense kept Dubuque off the scoreboard in the first quarter. Less than a minute into the second quarter, however, Spartans receiver Emanuel Jenkins, not even listed on the team’s pregame depth chart, notched the first of his three TD catches to complete a 41-yard drive. Dubuque took advantage of another short field following a third interception with a Jenkins score to make it 14-0 at intermission. Central, which had topped the 500-yard mark in three of its first four games, mustered just 86 yards in the opening half, including just 4 yards passing. Blaine Hawkins (junior, Ankeny), already among the most prolific passers in school history, completed just 2-of-9 first-half throws. 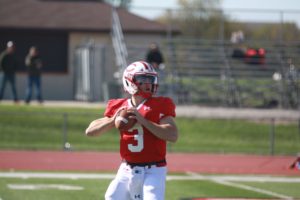 “For it to be 14-0 at halftime, you had to feel like you were still in the game and had a chance,” McMartin said. “We weren’t out of the game by any stretch, we just had to get something going and we never did.”

Instead of a third-quarter turnaround, the Dutch got a thud. Central was outgained 100-19 in the period and saw the deficit grow to 21-0.

“We needed to do something in the third quarter and we just didn’t,” McMartin said.

But Central’s final drive ended with a desperation throw and a fifth interception.

“We put the defense in some really challenging situations today,” he said. I thought we battled really hard and we just made it really tough to play good, clean football in how we did things today.”

Central was outgained 336 yards to 227. Hawkins was nine-of-23 for 113 yards passing with a career-high five interceptions and was sacked three times. McIntyre had 78 of Central’s 114 rushing yards on 12 carries.

“There were some run plays we ran pretty well but by and large it was just a really tough day for us,” McMartin said. “We have a lot of opportunities to grow and get better and we’re going to have to. Certainly this is far and away from what we’re capable of.”

After the punt game showed recent promise, the Dutch were stymied by the blustery conditions. Two Central punters averaged 28.0 yards on five kicks.

“We had a really good first punt and our last punt was pretty good but outside of that we really struggled in the kicking game,” McMartin said. “All phases of our special teams we can do better.”

But he also saluted a talented Dubuque squad. Quarterback Sean Duffy completed 27 of 37 passes for 265 yards and three touchdowns with one interception. 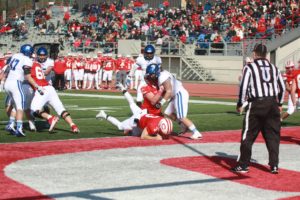 McMartin is already looking ahead.

“ After the game we just said it’s going to show a lot about who we are as a team by how we prepare this week and how we play next week because that’s all we can control,” McMartin said. “This one is done now and as disappointed as we all feel, it’s over and we have to learn from it and move forward. Our players in the locker room said the right things and had the right mindset. Now we have to go out and execute.”