Pleasantville celebrated its homecoming last week with dress-up days and other festivities. The celebration that involved the community truly began at the Thursday, Sept. 27, pep rally. 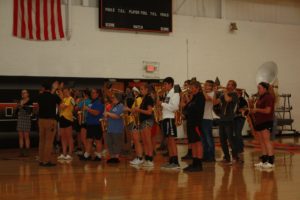 With the pep band rocking the PHS gym, the community flowed in. Silent auction sheets filled the cafeteria for the privilege of wearing players’ jerseys to Friday night’s football game. 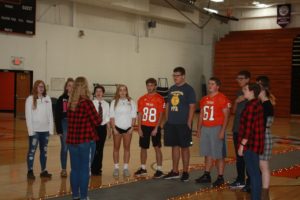 The military and veterans were saluted before the program began, complete with the National Anthem performed by the A Capella Choir. Lynn and Marilyn Padellford, Parade Grand Marshals for 2019, were introduced. 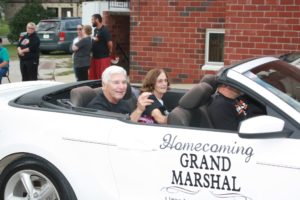 Royal attendants were introduced per their class order before fall coaches Aaron Fichter (cross country), Joel Allman (volleyball) and Mack Jorth (football) were introduced. They congratulated each other, as well as their teams, for the success thus far in the season.

The fun continued with a match game, featuring the 10 senior football players and their mothers. Score was kept, but everyone seemed to win. 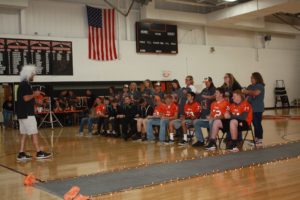 The 20th annual jersey live auction was held, featuring the jerseys of the senior football players. A great deal of money was raised for the Booster Club through this effort. 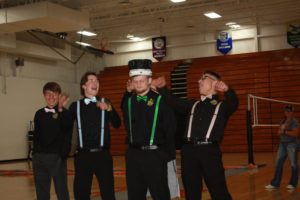 From there, it was time to crown the 2019 Homecoming King and Queen. The honors this year went to Cale Anthony and Noa Sample. Sample said it was quite an honor. She was very excited and was not expecting to receive the crown. 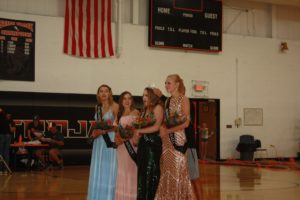 Anthony said it’s a great honor, but he is not much of a “dress-up” kind of guy. He appreciated the votes.