Following a lengthy lightning delay, the Pella High Little Dutch bested their intra-county, district rival Knoxville Panthers for a 24-0 win on Friday, Sept. 28. The game marked the end of a two-game losing streak for the Dutch and Knoxville’s best start since 1990. 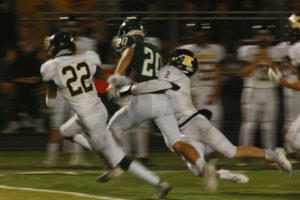 The Knoxville defense showed they came to play by forcing a three-and-out on Pella’s opening drive. Pella could not make anything happen on its second drive, either, but a strong punt put the Panthers on their own two to start Knoxville’s second drive.

A fumble near the five-yard-line was recovered by the Dutch’s Kody Huisman.

Ryan Mace and the offense took the field and immediately punched Pella’s ticket to the scoreboard with a run by Mace. After the Silas Vanderhoff extra point, the Dutch went up 7-0.

That was the only score of the first quarter, as both offenses struggled to get anything going between strong defense and penalties. Mace found his way into the end zone again in the second quarter, only to have it called back on a holding call against the Dutch. Pella had to settle for a 23-yard Vanderhoff field goal and a 10-0 lead at halftime.

Knoxville showed signs of life early in the third quarter when Keegen Cox intercepted Mace on the Panther nine. The Panther offense could not capitalize on the turnover.

A late hit call against the Dutch forced them to start the next drive on their own 15. With a little over three minutes left in the quarter, Mace connected with Josh Warner for a 49-yard touchdown.

Going into the fourth quarter down 17-0, Knoxville Head Coach Eric Kellar told his team to keep their heads up. After beginning their first offensive drive on their own two again, the Panthers were forced to punt.

With a little over 6:30 left to play in the game, Mace connected with River Baker for another touchdown. That would be all she wrote for scoring in the game, as the Dutch rebounded in their homecoming game 24-0. 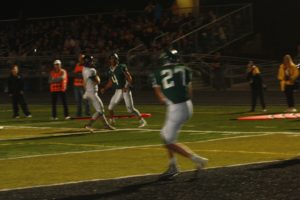 “We kept our heads in the game and kept pushing as a unit and we played as a team,” Huisman said after the game. “We’ve been able to learn as a team and I’m proud of the our team played tonight.”

“I’m proud of the effort, but there were too many mistakes and penalties,” Kellar said of the game. “Our tackling was probably the worst of the year, but the score does not indicate the effort our guys put in.”

For Knoxville, Kieren Nichols threw for 67 yards and rushed for another 26. Carter Bailey led Panther rushers with 49 yards. Ben Olson led receivers with 39 yards and defense with 8.5 tackles. Wyatt Darnell had two sacks for the Panthers and six total tackles. Logan Clark also had a sack for the Panthers.

Mace threw for 126 yards for the Dutch. Warner was his favorite target with 116 yards receiving. Nolan Clayberg led the Dutch’s ground game, with 129 yards.

Several Dutch defenders had more than one tackle on the night. Huisman and Nick DeJong led the defense with six total tackles each.

Knoxville travels to take on Grinnell Friday night, while the Dutch travel to take on South Tama.