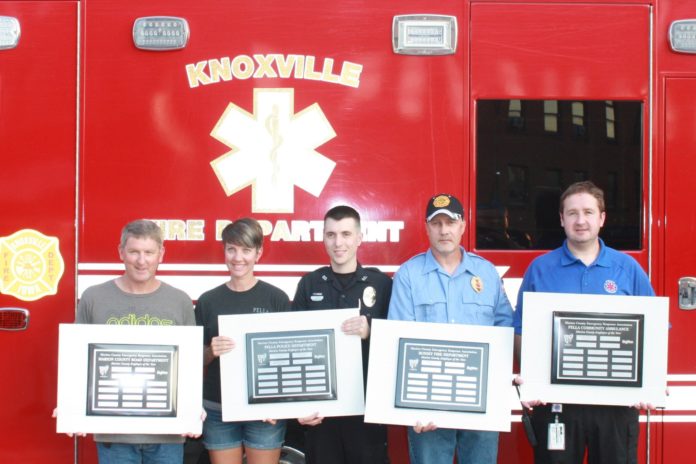 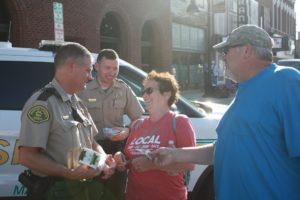 The purpose of the night was to connect the public with police, fire and ambulance officials. Most often, the people served by these agencies only come into contact with the responders on the worst days of the citizens’ lives. People of all ages were treated to looks inside emergency response vehicles, testing fire hoses and talking with first responders about all they do. 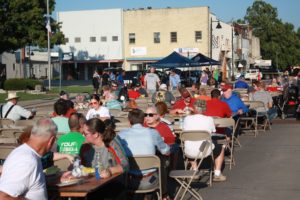 A program hosted by Pella Community Ambulance Director Greg Higginbotham and Knoxville Fire Chief Cal Wyman was held, in which they explained the importance of remembering the tragedies of Sept. 11, 2001, and establishing strong bonds between emergency response agencies and the public. 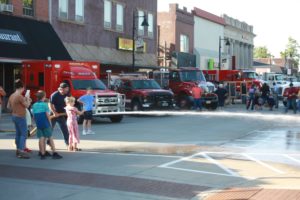 Awards were then presented to different responders in the county. Nominations from Marion County’s agencies were collected and given to Warren County officials to review and select winners. Warren County Sheriff Vos was on hand to help present the awards with Kelly Kayser, Store Director of the Knoxville Hy-Vee, who sponsored the awards and provided a meal. 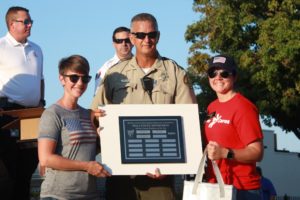 Receiving the inaugural award for Police Officer of the Year was Pella Police Department’s Andrew Shinkle. According to Shinkle’s nomination, he was one of the first on scene when Vermeer was hit by a tornado last year. He is motivated to do what he does by his family. 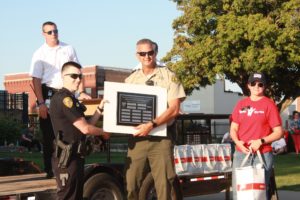 Public Works Employee of the Year went to Richard VanderVeer of the Marion County Road Department. VanderVeer’s role is as sign technician for the department. He is in charge of ensuring that traffic signs are in place – and replaced, even in the wee hours of the morning – on the hundreds of miles of roads the department is responsible for. 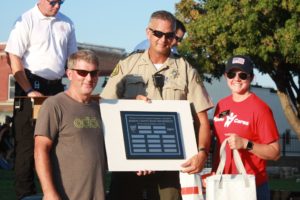 Pat Silvers of the Bussey Fire Department was named Firefighter of the Year. Silvers enjoys giving back to the community. When accepting the award, he said he believes there are hundreds of others in the county who are more deserving of the recognition. 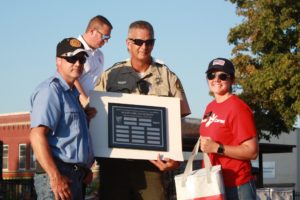 The EMS Professional of the Year award was presented to Jason Ford, who serves multiple agencies in the county including Knoxville Fire, Pella Community Ambulance and Melcher-Dallas Fire. 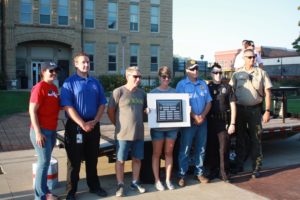 Kaci Visser of the Pella Police Department was named Dispatcher of the Year. Dispatchers have to maintain a calm demeanor and clear of line of communication to first responders to reach those in need. Visser was praised for her ability to do this during multiple emergencies in Pella. She said she does not do it alone, as she often has other responders and dispatchers nearby to address the situation. Emergency response is a team effort.

“We have a job to do,” Visser said. The five award winners were immediately finalists for the Public Safety Person of the Year. Visser was also presented this award.

Names of the award winners were engraved on plaques for each agency represented, with blank spaces available for future recipients of the awards. 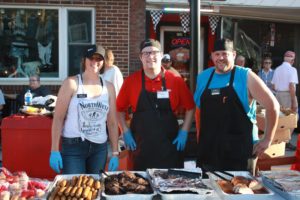 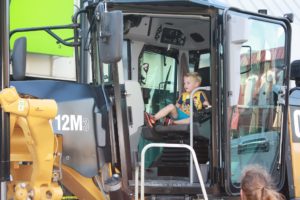 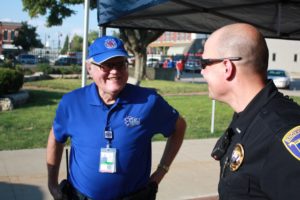