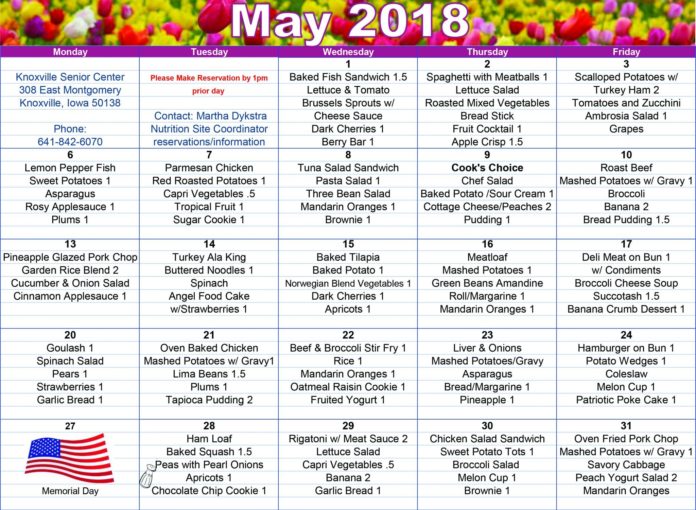 After one month of preparation, the Knoxville Senior Center will resume preparing meals for congregate meals at the center as well as Meals on Wheels within the city limits of Knoxville. Last Friday the Senior Center passed their initial state inspection and received their food preparation license.

The transition comes after Marion County Board of Supervisors approved restructuring the Senior Meal Program earlier this year. The board voted to close the kitchen at Knoxville Senior Center March 31 and deliver meals to Knoxville Senior residents prepared at Hy-Vee.

Since the decision by the Supervisors, the Knoxville Senior Center Board decided they would rather keep the kitchen open at the center. According to Senior Board President Mike Roberts, this was done to keep the social atmosphere going as well as continue preparing the meals that the seniors had been receiving prior to March 31st.

“During discussions at the center, by the senior residents of the community, it became obvious that they were not pleased about the kitchen closing,” Roberts comments, “The residents were concerned that closing the kitchen would harm the center and cause lack of participation and eventually end the Senior Center.”

The Knoxville Senior Board’s process to open the kitchen had several factors could have delayed the May 1st goal, but Roberts gives credit to several volunteers, Senior Center staff, board members, the city of Knoxville, Marion County Supervisors and Central Iowa Aging Resources.

“Our volunteers and staff did an amazing job cleaning, painting and organizing the kitchen to pass inspection. Without this effort, we never would have met our May 1st goal,” Roberts stated.

Roberts went on to say that Marion County Supervisors were also key to reaching the May 1st goal. He says the Supervisors donation of the remaining kitchen equipment not only saved money for the center, but the time involved in locating and moving this equipment.

Since passing the inspection, the staff at the center have been contacting previous residents to transition them back to the Meals on Wheels program at the Knoxville Senior Center. Roberts says this is going to be a bit of a challenge as they do not have all of the contact information.

“We will be working with the county to get our information this week, but we don’t want to risk letting anyone fall through the gaps,” Roberts said, “We will also be asking local media to assist us in getting the word out.”

The Senior Center Board President says the senior residents that have been contacted already are extremely pleased the old program has returned. Roberts anticipates this program will continue to grow in the future.

He goes one to say that the Senior Center has hired the same head cook that has prepared the meals for years. Many of the volunteers have also returned to help.

Roberts finished by saying he also encourages anyone who wants to enjoy a hot nutritious meal to call the day before and let staff know they are attending. Anyone under 60 is welcome and the meal is only $8.65.

If you are a resident within the city limits of Knoxville and would like to be included in the Knoxville Seniors Center Meals on Wheels program, please call 641-842-6070. You can also contact the center via email at knoxvilleseniorcenter@gmail.com. If you are not a resident but would still like to join us for a congregate meal, please call 641-842-6070.

Wood you like to Chat – Aaron Adams on Camping