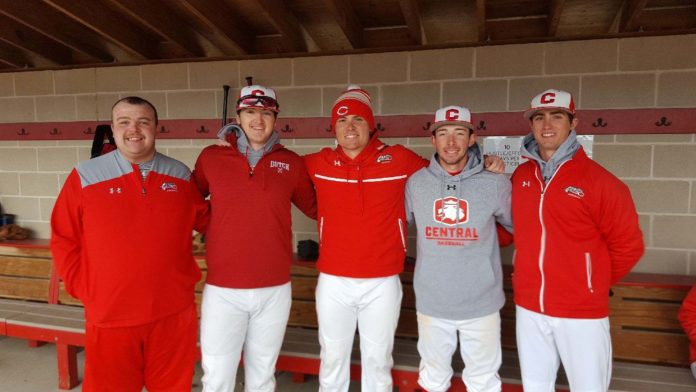 Homegrown talent is aiding the Central College baseball team this season, but if some of the players had followed their intended collegiate plans it would not have come to pass.

Carey, a fifth-year senior on the team, was a freshman when Head Coach Matt Schirm took over the squad. But as for the rest of the Marion County players, getting them to Central took some work.

Schirm tried to recruit Wood, but Wood originally chose to continue his studies and take his baseball talents to Truman State University. Moore opted to go to school in Muscatine, then Grand View University before landing at Central. Parker went to Kirkwood before his transfer to the Dutch. Finally, Wallace, whom Schirm tried hard to recruit, opted to go to Indian Hills Community College at first.

Though it took these players a while to choose Central, all of them are glad to be playing in front of a home crowd. All of them – though most had never played against each other – were familiar with each other’s talent through local media before becoming teammates.

Today, Carey serves as a captain of the Dutch team alongside Wood. These two were coached by Pella’s Jesse Jablonski, whom Carey says was the first person he turns to when he has a big decision to make. He adds that Jablonski who has a similar philosophy on the game as Schirm, as well as plenty of knowledge.

Moore, Wallace and Parker were each coached by Matt Miller. This is a common thread that helped the three connect when they all put on the red and white.

“Matt is one of a kind,” Parker said. “He realizes it is just a game, but it can also teach you important life lessons. He is really down-to-earth and I learned a lot from him.”

“He always taught us to be perfect with everything we do,” Moore added. Miller also showed him the importance of giving all you have, even in practice.

“He made it like a family atmosphere,” Wallace said of Miller. The coach also helped Wallace get his name out to colleges he was interested in attending.

Now that Schirm has these local players, he does his best to utilize them. Unfortunately, Parker does not see game time due to injury.

“I feel bad for Brent,” Schirm said. “He’s really talented, a real competitor who wants to get on the field. It’s been a rough go for him.”

Parker’s Saber teammate, Moore, is the Dutch’s leadoff batter. Schirm describes him as outstanding defensively and offensively, whose on-base percentage is high as well as his stolen base total. Moore is the Dutch’s starting center fielder.

Wallace, at the time of our interview, had three appearances on the mound for the Dutch as a freshman. The American Rivers Conference has no “bad” team, so even though Wallace showed signs of struggle, Schirm is confident that Wallace will be an outstanding player as time goes on.

Wood and Carey are pitchers. Both have a record of 2-0 as pitchers. When not on the mound, Wood also plays right field. Schirm calls them great leaders who really add to the team’s chemistry.

“There’s a lot of talent here,” Schirm said of his team. He is proud of being able to bring in so many local athletes. With a strong relationship with Miller and Jablonski – as well as his ties to Pleasantville Head Coach Sheldon Card, with whom he played on the Coe College team – there is definitely a strong pipeline to keep Marion County talent aware of the possibilities that exist with Central Baseball. Schirm has already been able to confirm at least one more local ballplayer, as Knoxville senior RJ Roberts has signed a letter of intent to attend Central.

As of April 1, the Dutch were 13-4 overall after taking two of three from Wartburg over the weekend. Regardless of which ARC opponent is across the diamond, Schirm knows his players need to be ready.

“If you don’t show up, it doesn’t matter who you are playing, you’re going to get beat,” Schirm said.