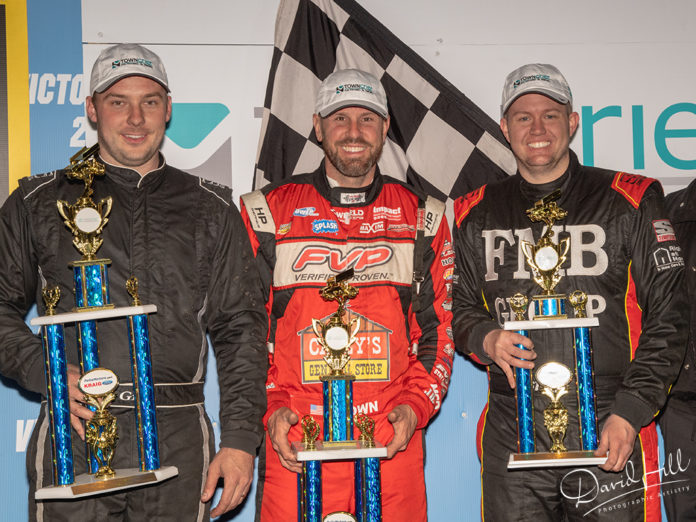 Knoxville, Iowa (April 20, 2019) – An emotional couple of weeks for Brian Brown culminated in his 45th career win at the Knoxville Raceway, and his third triumph in a Season Opener here on Kraig Ford/PellaMotors.com/Town Crier Night. It was worth $4,000. The Grain Valley, Missouri native lost his grandmother recently, and dedicated the win to her.Ryan Giles led wire to wire to grab the 360 feature, and Matthew Stelzer won in the Pro Sprints presented by Pace Performance.

Justin Henderson looked strong early in the 20-lap 410 feature ahead of defending track champ, Austin McCarl, Brown, Kerry Madsen and Parker Price-Miller. Brown worked by McCarl for second on third lap, while defending All Star Circuit of Champions titlist Aaron Reutzel had moved from outside row six to fifth on the multi-groove half-mile.

Reutzel continued his charge, battling Kerry Madsen back and forth before taking the spot at the halfway point. Meanwhile, the leaders were in traffic, and Brown used the cushion to shoot around Henderson to lead lap ten. Reutzel moved by McCarl for third on lap 13, and dueled Henderson for the second spot before sliding by with three to go.

“This is for my grandma, my grandpa, my mom, Danny (Lasoski) and my whole family,” said Brown in Victory Lane. “I sat up in section G, Row 19 for a lot of years. She was a big part of my life and career. I’m just proud of all of our guys. Winning here never gets old. The Dunkin’s did a wonderful job with the track. There were four or five lanes out there. I got to Justin there, and I couldn’t figure out how to get by him. I knew I had to attack. This is probably the toughest field we’ll face until the Outlaws get here. It’s fun.”

The 360’s had a stout 34-car field on hand. The start of the 18-lap main event was a ragged one. Rookie Kelby Wattwashed up the track, taking Ryan Bickett with him, just short of the turn one wall. Bickett retired, but Watt continued with wing damage.

Giles took control early, ahead of Carson McCarl, Jon Agan, Lee Grosz and Jamie Ball. Agan cruised the low groove to pass McCarl for second before Christian Bowman spun with two laps down. It would be the last caution. Giles led Agan, McCarl, Grosz and Ball back to green.

McCarl got back by Agan, as did Grosz, who moved into third. A lap later, Agan would return the favor, and on lap six, he overtook McCarl for the runner-up spot. Up front, Giles was heading into lapped traffic on the eighth circuit. Grosz moved into third with seven laps to go, and Cory Eliason followed him into fourth a lap later.

“This is great,” said Giles in Victory Lane. “We’re fortunate to be here. Last year was kind of a rebuilding year for us whether it seemed like it or not. Hopefully, we’ve got all the bumps behind us, and we’re looking forward to this year, taking it easy and having fun. I remember the last race we won was kind of boring starting up front, but the lapped traffic tonight made it fun.”

Matthew Stelzer stormed to his eighth career victory in the Pro Sprints presented by Pace Performance. He took control early from outside row two, in front of Devin Wignall and Chris Walraven. Tyler Barrick spun with one lap down, bringing the only caution of the event.

Jeff Wilke was an early mover, shooting from eighth to fifth on the first lap, and then gaining third on the restart. Brandon Worthington battled back by him on the fifth lap before Wilke did a 360 spin, kept it going, and dropped to fifth.

Up front, Stelzer won the 12-lapper, ahead of Wignall, Mike Johnston, Mike Ayers, Chase Young, Wilke, Walraven, Mike Mayberry, Worthington and Barrick. Young set quick time, while Wilke won the heat race. Rookie Matt Johnson took a wild ride after something broke on his car in qualifying. He walked away.

“After the heat race, I was really down on myself,” said Stelzer afterwards. “I went to some of my mentor’s advice over the years back in Lincoln, Nebraska. I threw the ‘kitchen sink’ at the car and things went well. I got by Devin. I know he’s going to be a good driver. I knew tonight he wouldn’t be able to keep up with me on this type of track, since it was his first time here. Good job to him. I have to thank my guys.”

Join us for Petro-Canada Lubricants Night, next Saturday night, April 27. The 410, 360 and Pro Sprints presented by Pace Performance will all be in action! For more information and complete results, visit www.KnoxvilleRaceway.com!

Trey Starks Wins His First at Knoxville on Night #1 of...