Rescue personnel were dispatched to the South Tailwater, below the Red Rock Dam, Saturday morning. Two people were pulled from the water after kayakers went inside a restricted area, according to witnesses.

Rescuers did retrieve one of the kayakers who was speaking with them in the boat after being pulled from the water. The other kayaker had floated down river and pulled into a boat by fishermen.

Kevin Beatty, age 56 of Tracy, was treated and released from Pella Regional. 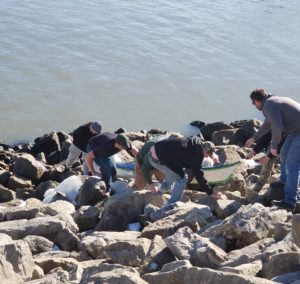 The joint rescue operation included the Marion County Sheriff’s Department, Pella Fire, Pella Ambulance, Knoxville Township Fire Department, City of Knoxville Fire & Rescue and, Iowa DNR and the Army Corp of Engineers as well as area fishermen and workers from the construction site at the dam.

Mike Roberts Photos: Emergency personnel are shown on the rocks, below the dam, carrying one of the Kayaks that went under in the restricted area after the operation.