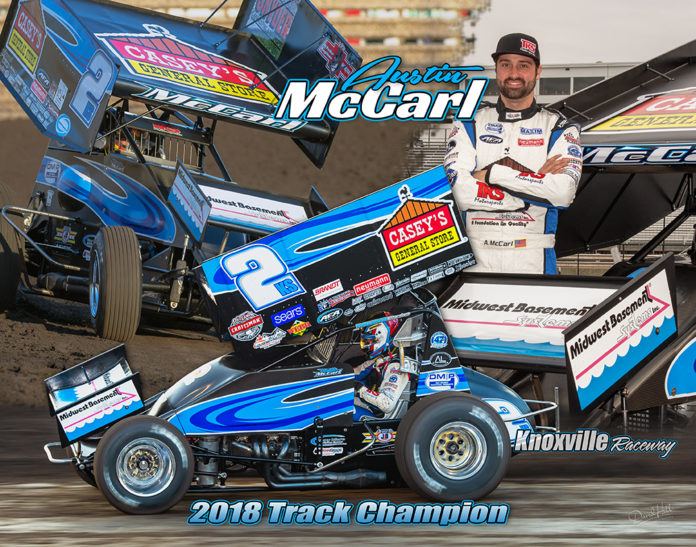 (Bill W) November 17, 2018 – In racing, family is what ties it together. At Saturday night’s Knoxville Raceway Championship Cup Series Banquet, the racing family was celebrated as over $250,000 in cash and contingencies were handed out. The event again played host to over 500 guests at the Prairie Meadows Racetrack and Casino in Altoona, Iowa, and was emceed by track announcers Tony Bokhoven and Kris Krug.

The contingency package was headlined by a giveaway of seven chassis. Each owner in all three sprint car classes was awarded a contingency (see prize list with winners below). The Knoxville Raceway Charitable Organization (KRCO) again will provide insurance for all 2018 Knoxville point eligible drivers and their efforts were applauded several times. Bell Racing USA also provided helmets to all three KCCS champions. Envelopes at each table were provided for donations for the California wildfire victims, including many of our racing friends in the “Golden State”.

After dinner, Promoter John McCoy and new Marketing Director Kendra Jacobs addressed the attendees. In addition to the thanks doled out to those who make Knoxville Raceway what it is, both expressed their excitement for the 2019 season and beyond.

Drivers and owners outside of the top five in each of the three respective classes received their accolades.

Marty Howard was named the honoree of the “Knoxville Raceway Fans of the Year”. Howard of Howard Law has contributed much to Knoxville’s racers the past few years.

The “Lyle Boyd Hard Charger Award” awards the drivers who passed the most cars in A main events this season. Ryan Leavitt received the award in the 305 class, with Sawyer Phillips(360) and Davey Heskin (410) receiving the award in their respective classes. It was Heskin’s third such award.

Brooke Tatnell was named the “Sportsman of the Year” in the 410 class, while Matt Moro (the second in his career) picked up the honor in the 360 class. Evan Epperson, won the award in the 305 class.

Bob Baker, the Executive Director of the National Sprint Car Hall of Fame & Museum, presented the “Ralph Capitani Heritage Award” to Knoxville Raceway videographer, Kris Krohn, who has been shooting high atop Knoxville Raceway for 25 years.