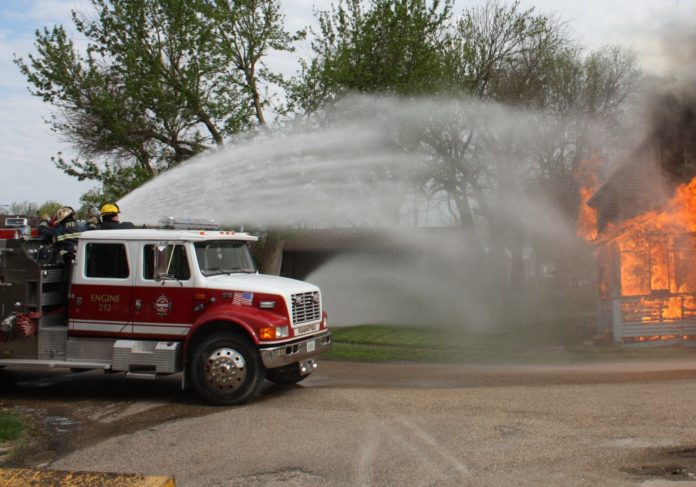 Pleasantville fire officials have determined that the cause of an early Tuesday morning house fire stemmed from the structure’s electrical panel. Regardless of the cause, the family is in need and the school district is stepping up to help them out.

Fire Chief Jordan Van Ness reports that the call came in around 4:20 a.m. Tuesday morning regarding a structure fire at 845 60th Street. An adult male occupant was the only one home at the time. He reported to fire officials that he heard popping noises. When he stepped outside, he saw flames coming from the attic.

Pleasantville Emergency Services arrived on the scene quickly. Mutual aid was called for, and crews from Knoxville City, Knoxville Rural and Melcher-Dallas all responded.

To put the fire out, firefighters had to cut holes in the ceiling. Van Ness said the fire was knocked down quickly. Due to the damage to the ceiling, as well as water damage, the home is considered a total loss. Some of the family’s belongings may be salvageable, but there is still a need.

The school district is leading a donation drive for the family. The superintendent’s office will be open during normal business hours on Thursday and Friday. Donations may be dropped off there at any time. The children are in tenth grade and fifth grade, and their grandmother lives at the home as well. Donations can also be dropped off at Pleasantville Elementary from 4:30-6:30 p.m. Thursday evening. Plans are to deliver the cash and goods to the family Friday evening.

The home’s electrical panel had been an issue for the family for some time, according to Van Ness. Van Ness was told by the occupant that he had to constantly reset the breakers – including once more Monday evening. The difference was that time, not all of the lights came back on. Van Ness advises anyone who is facing similar issues to be aware of this possibility. If you are having problems like that, he advises contacting an electrician.

Van Ness wants to thank the fire departments who responded, as well as the Marion County Sheriff’s Office who was on the scene quickly. Even in the early hours, the heat from the weather was already excessive. Additional personnel helped maintain a steady rotation of firefighters going in and helped with firefighter rehabilitation when they came out. One person was taken to the hospital for evaluation, but was fine.

Firefighters had the scene contained and left by 7 a.m. This was Pleasantville’s first fire since a small garage fire – caused by fireworks – on July 4.