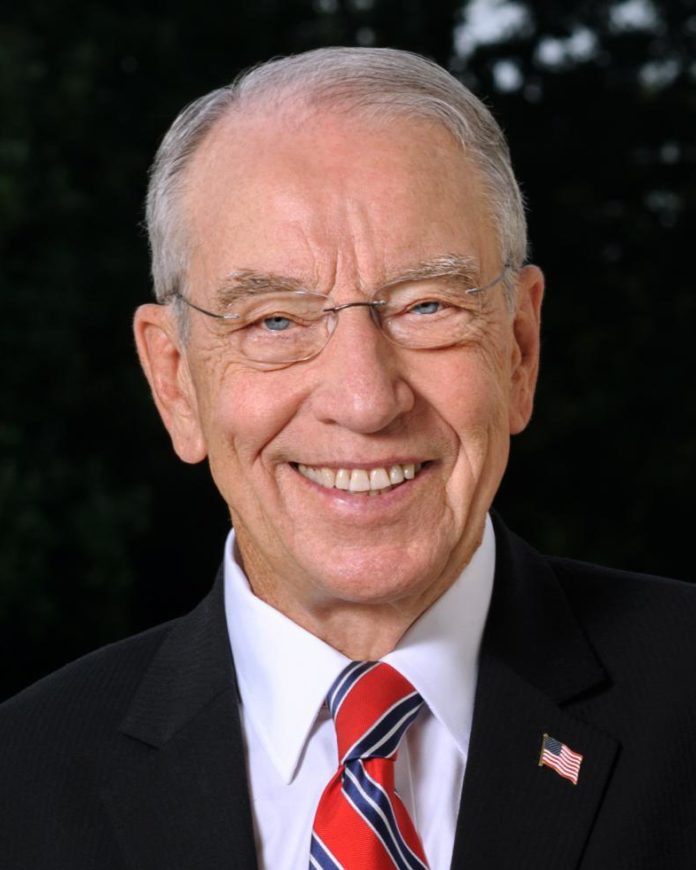 Today the Committee will examine the Justice Department Inspector General report on decisions regarding the 2016 presidential election.

This is only part one. Its focus is on the Clinton email investigation. The Trump-Russia investigation and surveillance controversies involve many of the same players around the same timeframe, but that report will come later.

I want to thank Mr. Horowitz for being here today to speak on these very important topics. I also want to thank Director Wray for moving his schedule around to be here today.

The Committee has yet to receive the two non-public sections of the report. One is classified and the other is described as “law enforcement sensitive.” I would appreciate if both of the witnesses here today would work to ensure the Committee receives them as soon as possible.

Mr. Comey’s attorney tells us he is out of the country, although I saw he was in Iowa over the weekend. According to his twitter feed, he seems to be having a wonderful time. This is the second time since he was fired that Mr. Comey refused an invitation to testify here voluntarily. He has time for book tours and television interviews, but apparently no time to assist this Committee, which has primary jurisdiction over the Justice Department.

Ms. Lynch also chose not to show up. The need for transparency does not end when senior officials are fired or quit.

We changed our rules at the beginning of this Congress to ensure the Chairman and the Ranking Member could compel hearing testimony from important witnesses like these. Unfortunately, the Ranking Member refused to agree to compel any of them to be here today. That’s a shame, because we should be asking them how all of this happened on their watch.

There was some shocking news in the Inspector General’s report. Thanks to his work, we already knew about Peter Stzrok, Lisa Page and their anti-Trump text messages. Now, in this report we learned that at least three others at the FBI did the same thing. The Inspector General referred all five of them for violations of the FBI’s code of conduct. Four of these five FBI employees were on the 15-member team investigating Hillary Clinton. That’s more than 25%. Three of these five employees later ended up on Special Counsel Mueller’s team.

Remember these facts every time you hear the press or my friends on the other side of the aisle claim that this report found “no bias.” You may hear that talking point a lot today, but don’t be fooled. Robert Mueller removed these people from his team. Why? Obviously, because this kind of political bias has no place in law enforcement. When it was exposed so clearly, Mr. Mueller had no other choice.

Most of the time, evidence of political bias is not so explicit. The details in this report confirm what the American people have suspected all along. Hillary Clinton got the kid-glove treatment.

The contrast to the Russia probe is stark. The biggest difference, of course, is the appointment of a Special Counsel. Attorney General Lynch refused to appoint one. The appearance of political influence was inevitable.

First, political appointees at Justice had a personal financial interest in a Clinton victory to keep their jobs.

Second, President Obama and his press secretary publicly signaled in April 2016 that Secretary Clinton’s actions only amounted to “carelessness.” Director Comey and the FBI took their cue from President Obama and picked-up the theme. In May, he started drafting his public exoneration, which ultimately called her conduct “extremely careless.”

Third, Ms. Lynch’s ties to the Clintons created the appearance of a conflict. She was a partner at a law firm that represented both President and Secretary Clinton. Bill Clinton also appointed her to be the U.S. Attorney for the Eastern District of New York.

Fourth, Ms. Lynch met privately with President Clinton days before she agreed with the FBI to close the investigation without any charges. If there were ever a time for a special counsel, this was it. Attorney General Lynch clearly should have recused herself, and this lingering controversy proves it. But she refused to step-aside, regardless of how bad it looked.

By contrast, Attorney General Sessions recused himself and his Deputy, Rod Rosenstein, appointed a hard-charging Special Counsel. The difference is night and day.

Under Lynch, Comey drafted a public exoneration of Clinton before 17 key witnesses were interviewed.

Under Rosenstein, no one seriously thinks Robert Mueller would plan a press conference to exonerate Trump before his investigators’ work is done.

Under Lynch, a low-level IT worker lied to the FBI twice about destroying records under subpoena and got immunity.

Under Rosenstein, a low-level Trump campaign associate provided the wrong date for a conversation with a professor and got charged with lying to the FBI.

Under Lynch, Clinton’s lawyers and aides who improperly held classified information got carefully crafted agreements to limit searches of their computers by consent.

Under Rosenstein, Trump’s lawyers and former aides got raided and hauled before grand juries.

The Justice Department faces a serious credibility problem because millions of Americans suspect there is a double-standard. They see a story of kid glove treatment for one side and bare-knuckle tactics for the other. They see politics in that story. But, this Inspector General report is only about the first part of that story: the Clinton matter.

The report has more shocking details. It wasn’t just Hillary Clinton using private email for official business—so was Jim Comey. It wasn’t just Andy McCabe talking to the press—so were dozens of others at all levels of the FBI.

So many FBI officials had unauthorized contacts with the media that the Inspector General couldn’t figure out who was leaking. Reporters were plying their FBI sources with tickets to sporting events, meals, drinks, and golf outings.

The FBI has managed to promote a culture that winks at unauthorized disclosures to the press, but punishes legally-protected whistleblowing. It stiff-arms Congressional oversight to hide embarrassing facts, while it leaks self-serving tidbits to friendly reporters bearing gifts. Director Wray has quite a mess to clean up.

The Department has serious accountability issues. In scandal after scandal, accountability is the exception rather than the rule. Nearly a decade ago the Department went after the late Senator Ted Stevens. Many suspected politics was a motivation to cut corners. Judicial investigators found two federal prosecutors committed intentional misconduct. But, the Department’s Office of Professional Responsibility watered it down to “reckless misconduct.” After years of appeals and administrative proceedings, guess what? Those folks are still federal prosecutors!

Now we have these senior FBI officials caught red-handed by their texts. I just want to remind everyone what former Director Comey said on multiple occasions. He said his people at the FBI did not give a rip about politics. Sometimes he said they didn’t give a hoot about it. Whether it’s a rip or a hoot, either way he was flat-out wrong.

Presidential politics was a major pre-occupation for those at the heart of both cases related to the 2016 election, including Director Comey. His subordinates said they were under enormous pressure to wrap it up before the political conventions. He was concerned about how it would look if Clinton won, and he had not reopened the case in October to examine new evidence.

Director Comey testified here on May 3, 2017 that he had never been an anonymous source or authorized anyone to be one in any story on these controversies. Well, I’m starting to wonder about that.

The Inspector General recently concluded in another report that former Deputy Director McCabe improperly authorized media leaks to make himself look good. Then he lied about it multiple times, both under oath and to Mr. Comey. Mr. McCabe denies that and his lawyer claims that there are emails with Mr. Comey that vindicate him. The FBI hasn’t provided any such emails and the Inspector General’s report doesn’t mention any.

Neither man would agree to come here and explain it to the Committee. Whatever happened, it is a sad state of affairs for the former top two officials at the FBI to be in a swearing contest over press leaks.

Justice should be blind. Law enforcement needs to ignore politics, follow the facts, and embrace oversight as a way to improve. The Inspector General’s report ought to be step one in the right direction. But, consequences must follow.

‘We are watching’ – Ernst Warns Washington Bureaucrats About Their End-of-Year...