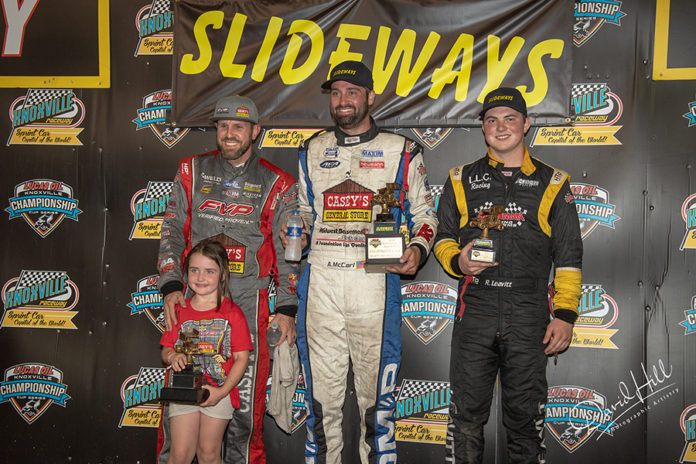 Photo By Dave Hill
by Bill Wright
KNOXVILLE, Iowa (May 26, 2018) – Austin McCarl won for the third time this season Saturday on Slideways Karting Center Night, and broke Brian Brown’s bid for four consecutive victories here at the Knoxville Raceway. Brown made a late charge, but McCarl maneuvered through traffic to win $4,000 for the TKS Motorsports #2KS team. Brown recovered from a rough start to win an exciting 360 feature from his eighth starting spot. Ryan Leavitt used a good start to win his second career 305 main event.

Davey Heskin won the early battle with McCarl to take the early lead in the 20-lap 410 A main. Brooke Tatnell moved into the third spot on the second lap, and Brown followed him into fourth on lap three. Heskin used the low side, but missed his spot a bit on lap four, and McCarl cruised by into the lead.

Five laps in, Scott Bogucki spun to the inside of turn two to bring out the caution. McCarl led Heskin, Tatnell, Brown and Kerry Madsen back to the green. On lap seven, Heskin and Tatnell made contact in turn two, opening the door for Brown and Madsen to move into third and fourth. On lap eight, Brown would ride around Heskin for the second spot.

McCarl entered lapped traffic on lap eleven. Kerry Madsen won a fierce battle with Heskin for third on lap thirteen. Meanwhile, Brown seemed determined to take his fourth win in a row here as he slowly reeled McCarl in. McCarl maneuvered well, but on the white flag lap, a lapped car almost got sideways in front of him, slowing his progress.

“(Brown) is obviously one of the baddest hombres here and one of the best to ever drive here,” said McCarl in Victory Lane. “I definitely saw him (late), but traffic was so hairy. That was by far the most treacherous cushion I have run by far here. Traffic got insane, and I saw the white flag and traffic really got insane in one and two. My hat goes off to my team. Troy (Renfro) and I are really clicking now, and hopefully, come August, we’ll have something for these guys.”

Matt Juhl led early in an 18-lap 360 thriller. Robbie Price, Matt Moro, Clint Garner and Jon Agan settled in behind him, while a trip over the cushion and almost into the wall saw Brian Brown lose several spots from his eighth place starting position.

Garner jetted from fourth to second on the second lap, while Brown rebounded to get back into the top five. Brown would take fourth on lap four, before Christian Bowman spun in turn one while running seventh. Juhl led Garner, Moro, Brown and Agan back to green on the race’s only restart.

Brown worked by Moro to take third on lap six, and did the same to take second from Garner on lap eight. Juhl entered lapped traffic on lap ten with Brown in hot pursuit. Brown was gaining, but Juhl had other issues when his car slowed on the back chute on lap 13.

Brown would go on to pull away for his sixteenth career 360 win here worth $1,500. Garner was second, ahead of Moro, Nate Van Haaften and hard-charger Sawyer Phillips. Agan, Price, Thomas Kennedy, Dylan Peterson and Joe Beavercompleted the top ten. Van Haaften posted quick time, while Ball, Brown and Agan were heat race winners.

“It was a taller cushion and I got off the gas (on the start in turn one),” said Brown in Victory Lane. “It made it a little bit harder. This 360 class at Knoxville…there are no slouches here. We’ve had an issue with our (360) car the last month or so, so we decided to run it here tonight and it did well. It’s Memorial Day weekend, and without the soldiers past and present that have given…we wouldn’t be here now.”

Ryan Leavitt got a good start from outside row two to lead the 15-lap 305 feature early over Josh Jones, Matthew Stelzer, Eric Bridger and Devin Kline. Stelzer passed Jones for second on lap three, while Kline moved into fourth. Kline would then take third on lap four, while Bridger passed for fourth on lap six.

Meanwhile, up front, Leavitt was cruising into lapped traffic by lap eight with a four and a half second lead. Kline was the driver on the move the last half of the race after starting in row four. He used the low side to pass Stelzer with six to go.Dan Henning stopped in turn four to bring the yellow flag on lap ten.

Leavitt led Kline, Stelzer, Bridger and Kevin Hetrick back to green. Leavitt entered turn one high with two to go, and Kline shot under him to take the lead on the backstretch. However, Dallas Mendenhall came to a stop in turn four at the same time, negating the pass.

“I saw Devin there,” said Leavitt in Victory Lane. “I know he’s a tough competitor. He kind of showed me that bottom line down in one and two (before the last caution). I wanted to make sure I blocked him down there. I want to thank everyone who makes this possible for us, and thank you fans for coming out and supporting us.”

Join us next week, Saturday, June 2, for McKay Insurance Agency/Nationwide Night for the Knoxville Championship Cup Series 410, 360 (also including the Nebraska 360 Series) and 305 sprint cars! It will also be National Sprint Car Hall of Fame induction weekend. For more information, visit www.KnoxvilleRaceway.com!