Doug Hatch took over as head coach of the Knoxville High School wrestling program four years ago, the same time four wrestlers came in as freshmen. All five have formed a strong bond while leaving an impact on the program.

“They’re a great group,” Hatch said of the seniors. Those seniors of which he is speaking include CodyRay Smith, Chase Bellon, Joe Hollinrake and Matthew Landsperger. All four of their careers began long before high school – a couple before elementary school. Most of them come from family legacies.

Joe started wrestling when he was four years old. His brother was a good wrestler and once Joe got involved, “it kind of stuck.”

In high school, Joe had amassed 156 wins as of our deadline. He had qualified for district wrestling on two occasions and set records for the most wins by a wrestler in each grade 9-11, and most wins at Knoxville.

Hatch said Joe has led by example. Joe’s wrestling efforts have gone beyond those offered through the high school. While he has loved the sport, he does not plan to continue to wrestle in college; he’d rather focus on studying to enter the medical field.

Chase’s father was a good wrestler as well, which brought him into the sport. Hatch and Chase both admit that Chase did not enter the high school program as a top performer. In Hatch’s words, Chase needed some “fine tuning,” but he has consistently improved. Chase has accumulated at least 86 wins in high school and qualified for districts. Two colleges have made offers, but he is more focused on attending college at this time and is undecided.

CodyRay followed in the footsteps of his father and uncle. He first hit the mat at age three and continued to improve throughout his life. In high school, he never missed a practice and is a four-year letter winner. He has at least 101 wins and has qualified for district wrestling. Getting at least 100 wins in high school was always a goal for CodyRay, along with making it to the state wrestling tournament. Two colleges have already contacted him about joining their wrestling programs, but he is undecided.

Of the four, Matthew has thus far been the only one to make it to The Well. He began wrestling in kindergarten and never quit. Matthew’s drive would not allow him to stop and the work has paid off. In his high school career, he has at least 46 wins and finished in fourth place at state.

Matthew went into the Feb. 3 sectionals with a torn ACL. He fully intended to give the sport all he had in his remaining high school matches, but is undecided about collegiate grappling. Joining the University of Minnesota wrestling team is still under consideration.

Hatch has been glad to see these four mature, not only as wrestlers, but as young men. All four lead the team in their own way. For instance, CodyRay likes to guide the underclassmen to success while Bellon is the strong leader who often tells his teammates to “get going.” Joe leads by example with his work ethic and dedication. Matthew, who encourages everyone to relax and have fun, also demonstrates what hard work can help you achieve.

Off the mat, the boys provide an equally good example for Knoxville’s youth, Hatch adds. This is something they take just as seriously by the boys, who want to be pillars of the community.

The wrestlers are complimentary of Hatch and assistant coach Ryan Sheldon. Hatch’s famous pre-match slaps on the back only seem to get harder the more successful a wrestler is at a meet. They believe Hatch and Sheldon balance each other well. Sheldon is known for telling them how to improve, while Hatch works hard at building them up.

This group does not need much encouragement to give it all on their mat. Each carries that intensity to every match, but were definitely prepared to step it up a notch as the postseason begins. All of them enjoy the unique team sport of wrestling, in which it is just you on the mat against your opponent.

“I usually try to go all out whenever I wrestle,” Joe said.

“Losing in wrestling is different,” Chase said. “It’s your failure.”

All the wrestlers call themselves their own harshest critics.

Their approach to each match is different as well. While they may have a game plan, adjustments must be made.

“You learn in your match and adjust,” CodyRay said. “You wrestle tough no matter what.”

As grueling as the training can be, and the hard work wrestling – especially successful wrestling – requires, all of them have found the sport to be fun. They consider their teammates family and they support each other, just not during practice when they wrestle each other.

“You’re not supposed to be nice to each other on the mat,” Joe said.

As they look back on their high school careers, which may have ended by the time you read this if they were unsuccessful at the sectionals in Williamsburg, all of them have enjoyed being Panther wrestlers. All of the hard work has been worth it and they will miss the program. They will also be missed.

“These guys have meant the world to me,” Hatch said.

Everyone hopes the black and gold will be strongly represented when district wrestling takes place on Knoxville’s home mats on Saturday, Feb. 10. District winners will move on to the state tournament at Wells Fargo Arena. 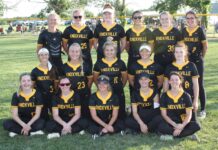 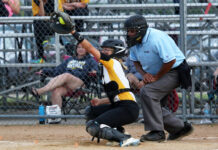 Hudson named Class 3A Assistant Coach of the Year